Publishing rights consultant Kris Kliemann attended the prestigious Jerusalem International Book Forum mid-May, where she moderated a panel on selling, buying and managing international rights, and kindly took the time afterwards to share her takeaways with IPR for our blog.  Here below is her report.

Since the early 1960’s, the city of Jerusalem has been a destination for a week-long gathering of writers and publishing professionals.  A couple of weeks ago, the convening of the Jerusalem International Book Forum (JIBF) continued the tradition – but with a new focus on workshops and meetings that brought together a diverse international group of publishers, editors, agents, film industry experts, rights and licensing pros, writers and translators.   The three-and-a-half-day program of panels and presentations ranged from overviews to in-depth looks at very specific aspects of the business – with a particular focus on literary titles in translation.      As you might have read elsewhere, the week began on Sunday night when Joyce Carol Oates accepted the Jerusalem Prize, and gave a moving speech about the origins of her literary prowess – it was her grandmother who first took her into the public library and later gave her an Olivetti typewriter. 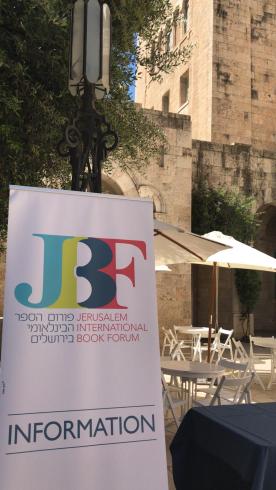 On Monday, the executive summary session, featuring Markus Dohle, CEO of Penguin Random House, and Stefan von Holtzbrinck, CEO of Holtzbrinck Publishing Group in a wide-ranging joint interview conducted by Andrew Franklin, founder of Profile Books, revealed insights into the present-day state of publishing at two of the largest publishers in the world.   These top-level execs also talked about their own roles as leaders and each mentioned initiatives for improving lives of employees (such as higher entry level salaries at PRH, and supporting start-ups within HPG).   Commitments to sustainability and literacy and access to books globally were also common themes.

Tuesday’s sessions turned to some of the practicalities and many of the nuances of how books get acquired and translated and published around the world.   The pairing of the Icelandic writer, Sjón, with his Hebrew translator, Moshe Erlendur Okon, was particularly interesting and included Mr. Okon’s story about becoming a more sensitive, informed translator of Sjón’s work, as a result of living in Iceland and experiencing the weather, flora, fauna and the culture first hand.   The role of the translator as an advocate for the writer’s work within the publishing process was also discussed – quite often translators are instrumental in bringing foreign literature to the attention of editors, even if, generally, translators frequently don’t receive enough credit for their role.

On Tuesday afternoon, I had the good fortune of moderating a panel that included both buyers and sellers of rights all with a keen eye for a good book, a great read.   Each generously shared his or her wealth of knowledge and gave wonderful insights into what they see as crucial issues in their daily business.  Concerns around finding a way for publishers to stick with authors for the duration of their careers, to encouraging those who are attempting to sell books to think less about today’s popular catch phrase “authenticity” and more about the classic value of “beauty” in literature, were complimented by more practical information related to, for example,  the nuances of publishing in France, where author’s agents are generally not a part of landscape, and the variety of cultures in Latin America (which unfortunately is sometimes perceived by non-Spanish publishers as a monolith.)

Wednesday’s panels included a lively take on selling books, which, per HarperOne Group publisher Judith Curr, ideally begins within a publishing house from the moment that a book is acquired.  Sara Lloyd, Pan Macmillan’s Digital and Communications Director, pointed to some strong work being done using digital tools to reach readers where they are – and to circumvent the inherent passivity of relying on “discovery” as a path to sales.  James Daunt, MD of Waterstones, affirmed the role that authors play in selling, as well as the primacy of packaging and good covers – which could mean telegraphing genre by using a well-worn design / illustrative style, or could mean doing something completely fresh and never before seen.  The strong future for physical bookstores and making a book store a warm social space, drawing audience in, was also featured as a critical piece of process.   Wednesday’s final discussion — about the influence of film, and particularly TV and streaming services on the business of books, highlighted the growing market for book content in general with an emphasis that the longer running series approach meant that film/TV interest no longer focused only on new frontlist titles – but allowed for a deeper reach into backlist – a very heartening trend.

Learn more about the full program of JIBF, the Zev Birger Editorial Fellowship Program, and the collaboration with the International Writers Festival here.