One of our most popular categories on the IPR platform is children’s, so we thought we’d take the opportunity to share some of our top titles for the summer, all with translation rights available to buy.  If you are interested in learning more about any of these books, simply request a content preview via any of the title pages. 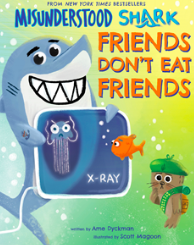 This hilarious follow-up to Misunderstood Shark by New York Times bestselling duo Ame Dyckman and Scott Magoon tackles what it really means to be a good friend. Bob is already irate that Shark has eaten him, but when Shark doesn’t admit to eating him, Bob is so mad he declares that the ocean isn’t big enough for both of them! Friends Don’t Eat Friends is exploding with over-the-top humor and awesome marine facts! For example, when Shark overdoses on Finilla Ice Cream after fighting with Bob, we learn that shark teeth are coated with fluoride. Lucky for Shark, he can’t get cavities! Join Shark and the gang for and find out if Shark learns his lesson about friendship, or if he really is just misunderstood. 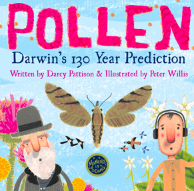 How long does it take for science to find an answer to a problem?

On January 25, 1862, naturalist Charles Darwin received a box of orchids. One flower, the Madagascar star orchid, fascinated him. It had an 11.5” nectary, the place where flowers make nectar, the sweet liquid that insects and birds eat. How, he wondered, did insects pollinate the orchid? It took 130 years to find the answer.

After experiments, he made a prediction. There must be a giant moth with a 11.5” proboscis, a straw-like tongue. Darwin died without ever seeing the moth, which was catalogued by entomologists in in 1903. But still no one had actually observed the moth pollinating the orchid.

In 1992, German entomologist, Lutz Thilo Wasserthal, Ph.D. traveled to Madagascar. By then, the moths were rare. He managed to capture two moths and released them in a cage with the orchid. He captured the first photo of the moth pollinating the flower, as Darwin had predicted 130 years before.

Between the Walls by Tuula Pere (author), Andrea Alemanno (illustrator)

On his sailing trip, Leo the little wanderer arrives at a rocky bay and disembarks on a deserted pier. It belongs to two towns that are feuding furiously with one another. The angry mayors won’t allow the traveler inside their stone walls. But luckily for Leo, between the two towns lies a piece of land that nobody owns. It is just big enough for his neat little cabin and garden, where many flowers bloom and the beautiful sounds of his violin fill the air. On warm nights, people climb onto the walls together to admire the view and listen to the music and the sea. “Would it be better, after all, to tear down the walls that separate us?” the townsfolk begin to wonder.

Jwala Kumar and the Gift of Fire: Adventures in Champakbagh by Hansda

Is Jwala Kumar a bird? A bat? A chameleon? Or is he something no one has ever seen before? And did he really just fall out of the sky into Champakbagh?

Mohan Chandar lives with his wife and three children in the tiny and remote village of Champakbagh. One day, he rescues a strange creature from the storm that is raging outside. When he brings the creature home, the family is astonished. What sort of animal is this? Is he friendly? What does he eat? Where will he sleep? They name him Jwala Kumar, and as the days go by, they discover that Jwala Kumar is no ordinary animal. He has special powers that he uses to help his human family in their times of need. When the days are dark and hope seems to dim, Jwala Kumar lights up their lives in many ways. But who is Jwala Kumar and will he stay forever? Jwala Kumar and the Gift of Fire is a captivating story of innocence and friendship, of magic and love, and of gifts that last a lifetime.